AutoZone, Inc. (NYSE: AZO) is a much sought-after automotive parts retailer among do-it-yourself customers, especially after the virus-related movement restrictions forced people to stay indoors. The company’s stock has remained surprisingly resilient to the economic challenges so far. 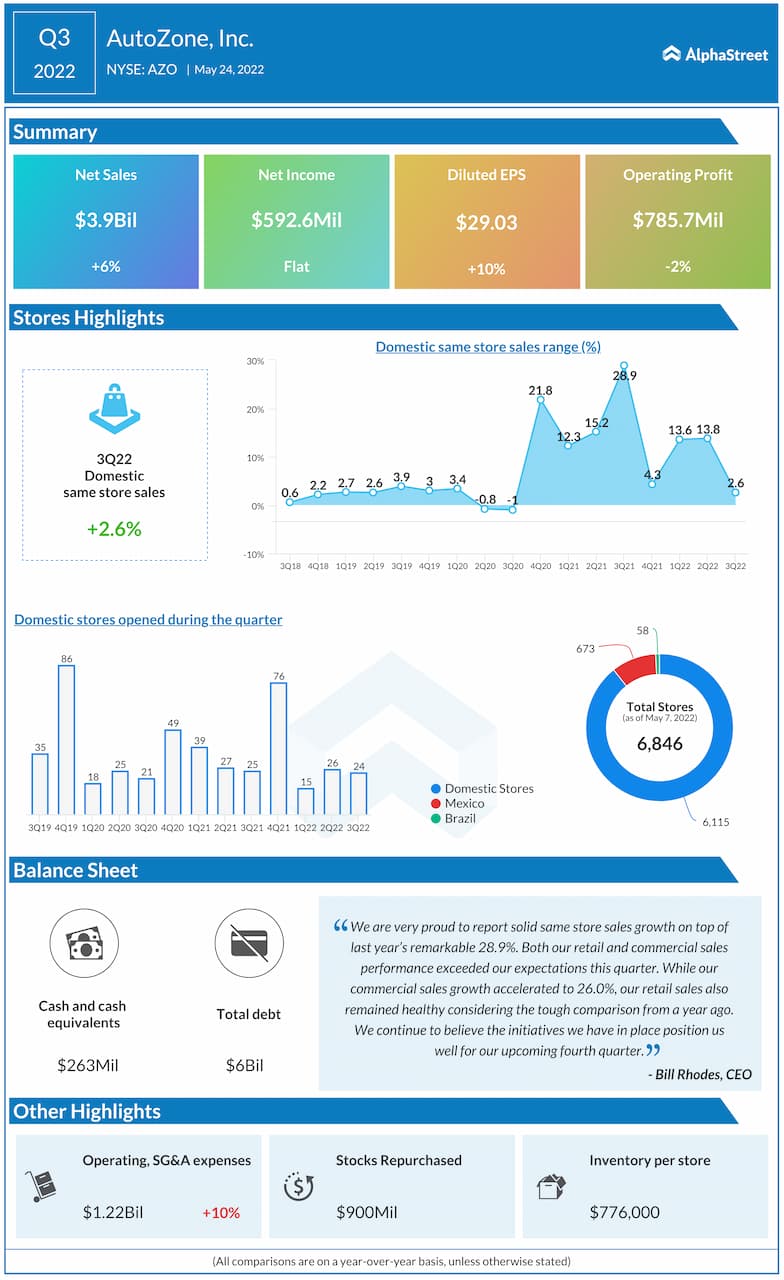 AZO is currently trading broadly at the levels seen six months ago, though after a series of ups and downs. This is in sharp contrast to the benchmark indexes that suffered big losses during that period. In a rare show of strength, the stock rose to an all-time high a few months ago.

Unlike the majority of Wall Street stocks that slipped to new lows this year, AutoZone stayed strong, disappointing prospective investors who were looking for a dip to make their entry. It is one of the most expensive stocks and is currently trading well above its long-term average. For those who can afford it, AutoZone remains a great investment with the potential to create strong shareholder value even at a valuation so high — that can be linked to the management’s aggressive share buyback program.

Having taken advantage of the do-it-yourself wave, the Memphis-based company is currently focused on do-it-for-me customers, which the management believes would play a key role in driving growth going forward. These segments account for more than two-thirds of total sales. The demand for parts and services is expected to remain high as people tend to postpone new purchases and hold on to their old vehicles due to economic uncertainties.

At the end of the first half, the company operated over 100 more stores than in the previous year. In the past couple of years, when the business world witnessed unprecedented uncertainty, AutoZone performed much better than what was widely expected, especially on the profit front. The growing cost pressure in certain categories like transportation is a concern, but the company’s pricing strategy is good enough to offset the impact of high inflation.

Meanwhile, domestic same-store sales retreated to the pre-COVID levels in the third quarter, indicating that the pandemic-driven boom is probably waning.  At $3.9 billion, net sales were up 6% year-over-year as both retail and commercial sales growth accelerated. Consequently, net earnings rose 10% to $29.03 per share and topped expectations.

“Our performance, considering the amount of time from the last stimulus and the ending of the enhanced unemployment benefits, has substantially exceeded our expectations and gives us continued conviction about the sustainability of the massive elevated sales levels we have experienced since the beginning of the pandemic.“

The company is going ahead with its growth initiatives despite the challenging retail environment and continues to invest in the business. Over the past twelve months, AZO underperformed the S&P 500 index quite often. After maintaining a steady uptrend so far this week, the stock traded higher on Thursday afternoon. It gained about 18% since last month, once again breaching the $2,100-mark.