Shares of Starbucks Corporation (NASDAQ: SBUX) were down over 1% on Friday. The stock has dropped 27% year-to-date but has gained 11% over the past three months. Earlier this week the company delivered a decent earnings report for its third quarter of 2022 despite pandemic and inflation-related headwinds, which made investors happy. Here are a few points to keep in mind if you have an eye on this stock: 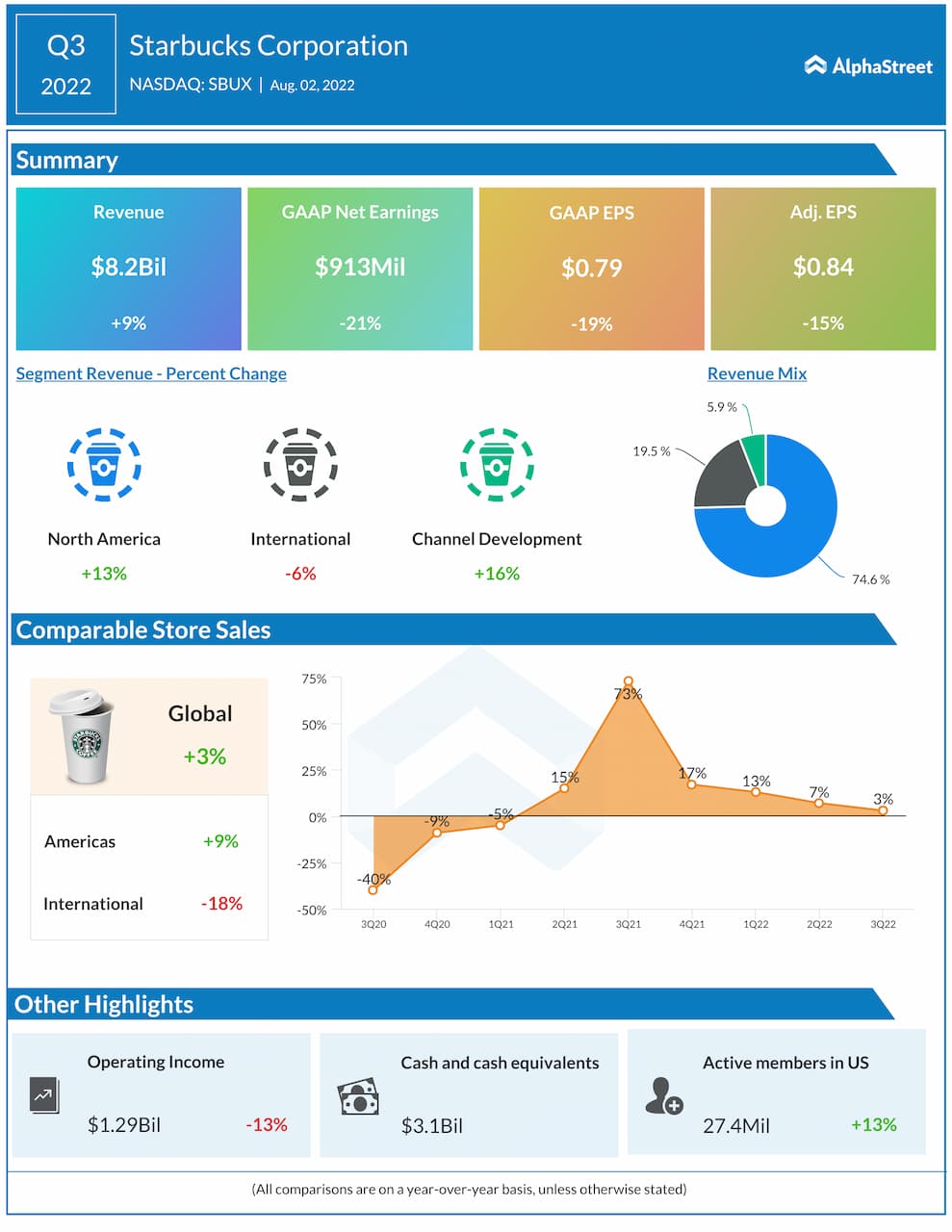 Starbucks delivered consolidated net revenues of $8.2 billion for the third quarter of 2022, which was up 9% compared to the same period a year ago, driven by strong demand and double-digit revenue growth in the US as well as almost all major markets and channels across its global portfolio.

Global comparable store sales were up 3%, driven by a 6% growth in average ticket but partly offset by a 3% decline in transactions. Operating margin contracted 400 basis points to 15.9% in the quarter due to the impacts of inflation, pandemic-related lockdowns in China and investments in labor. Adjusted EPS declined 15% year-over-year to $0.84 but beat market expectations.

Starbucks opened 318 net new stores in Q3, ending the quarter with 34,948 stores worldwide. 51% of Starbucks’ stores were company-operated while 49% were licensed. The North America segment recorded net new store growth of 2% while the International segment recorded store growth of 8% in Q3. At the end of the quarter, the company had 15,650 stores in the US and 5,761 stores in China. The stores in both these countries made up 61% of Starbucks’ global portfolio.

The US business delivered 9% comp store sales growth, driven by growth in average ticket, which in turn was fueled by strategic pricing and food attach. Growth in the US licensed store business contributed to the strong top line performance in North America. However, operating margin in North America declined 250 basis points to 22.2% in Q3 due to inflation and labor investments, partly offset by pricing.

During the third quarter, Starbucks witnessed severe COVID-19-related disruptions to its operations in China. The company’s largest market, Shanghai, where it has over 940 stores, faced a complete lockdown for the major part of the quarter. In Beijing, around one-third of its stores were closed for almost a month and a half.

The pandemic-related headwinds led to a 40% decline in net revenue and a 44% drop in sales comp in China in Q3 versus the year-ago quarter. This in turn impacted the international segment’s performance leading to an 18% drop in comp sales and a 6% drop in revenue for the quarter.

The company is seeing comps improve in places where restrictions are slowly being lifted. It anticipates a strong rebound in sales once the lockdowns are over. Starbucks opened 107 net new stores in China during the third quarter. The company remains on track to have 6,000 stores in China by the end of this year.

Starbucks expects its margin and EPS for the fourth quarter of 2022 to be lower than the third quarter. It also expects to face higher pressures due to the later-than-expected start of the recovery in China as well as certain benefits from tax credit and government subsidies gained in Q3 not continuing in Q4. In addition to this, the fourth quarter will be impacted by a step-up in investments as well as typical seasonality.

The post Starbucks (SBUX): Here are a few points to keep in mind if you have an eye on this coffee giant first appeared on AlphaStreet.

Starbucks (SBUX): Here are a few points to keep in mind if you have an eye on this coffee giant