Shares of Altria Group Inc. (NYSE: MO) were down on Wednesday. The stock has dropped 11% year-to-date and 15% over the past 12 months. There is a mixed sentiment surrounding the stock in general. Even though a challenging operating environment and losses on investments have cast a shadow on the company’s prospects, there are those who believe Altria can weather these headwinds in the long term. Here are a few points to keep in mind if you have an eye on this tobacco giant: 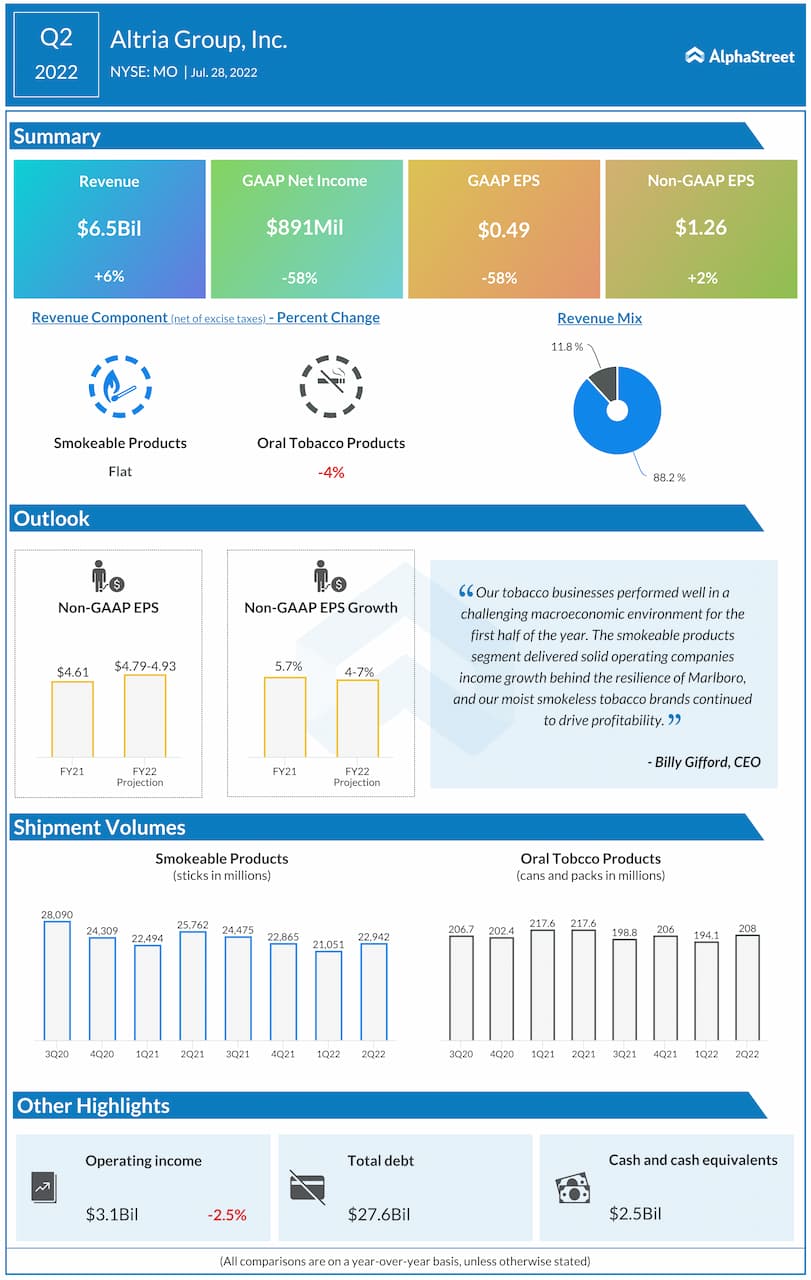 Revenues from Altria’s smokeable products fell nearly 3% in Q2, mainly due to lower shipment volume. Revenues from oral tobacco products were also down 4% due to lower volumes. This collectively led to a 5.7% decline in total revenues during the quarter. Revenues, net of excise taxes, were down 4.3%.

Altria’s $12.8 billion investment in e-cigarette company Juul Labs is being seen as one of its biggest mistakes by the Street. In June, the FDA ordered all of JUUL’s products off the market in the US and although the ban has been temporarily lifted by the agency, Altria’s investment appears to have lost most of its value.

Smoking was never popular with the law and tobacco companies are constantly dealing with new regulations and prohibitions. For instance, the current administration in the US is considering setting a maximum nicotine level for cigarettes.

In general, cigarette smoking has been trending downward and at any given time, people are encouraged to quit smoking. These factors pose the risk of a gradual decline in demand for Altria’s products. As the concept of tobacco harm-reduction gains traction, companies are shifting their focus to smoke-free products and the opportunity in that space.

Altria has a good dividend profile. The company raised its dividend by 4.4% to $0.94 per share last month, marking its 57th increase in the past 53 years. This brings the annualized dividend rate to $3.76 per share, representing a dividend yield of 8.2%.

The post Altria (MO): A few points to keep in mind if you are considering this tobacco giant first appeared on AlphaStreet.

Altria (MO): A few points to keep in mind if you are considering this tobacco giant