Shares of Alibaba Group Holding Ltd. (NYSE: BABA) were up over 2% on Thursday. The stock gained as much as 5% after the company delivered better-than-expected results for the first quarter of 2023 but pared some of its gains later. The stock has dropped 12% year-to-date and 50% over the past 12 months. 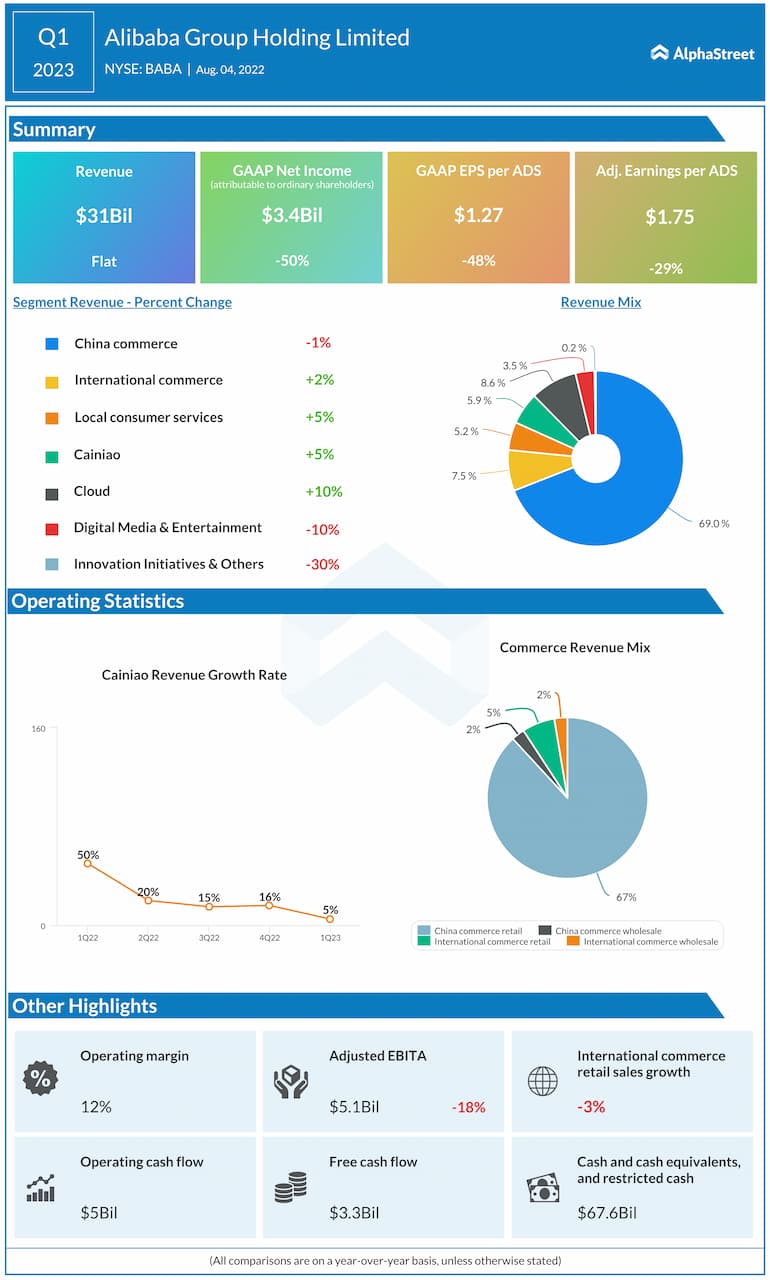 Alibaba generated revenues of $30.6 billion for the first quarter of 2023, which remained flat compared to the year-ago quarter but surpassed market projections. Net income attributable to ordinary shareholders was down 50% YoY to $3.4 billion. Adjusted diluted earnings per ADS declined 29% YoY to $1.75 but came ahead of estimates.

This is the first time ever that Alibaba has reported flat revenues in a quarter. This was caused by a 1% YoY decline in China commerce revenue. During the quarter, the China commerce business was impacted by logistics and supply chain disruptions caused by COVID-19 lockdowns. Online physical goods gross merchandise volume (GMV) generated on Taobao and Tmall, excluding unpaid orders, declined mid-single digits YoY.

Despite these headwinds, Taobao and Tmall did well in terms of consumer retention, especially among consumers with higher spending power. 98% of the annual active consumers who each spent over RMB10,000 on Taobao and Tmall in the twelve months ended June 30, 2021 continued to be active during the twelve months ended June 30, 2022.

Alibaba’s bargain platform Taobao Deals has been helping manufacturers sell directly to consumers and during the first quarter, the paid GMV from these M2C products on Taobao and Taobao Deals grew more than 40% YoY. Taobao Deals significantly narrowed losses during the quarter by improving the average spending of active consumers and effectively managing its user acquisition expenses.

The company’s grocery and fresh goods pickup service Taocaicai has managed to expand into areas with more population and consumption power. Its GMV jumped by more than 200% YoY in Q1 and while its losses were up slightly from last year, they were down significantly on a sequential basis.

In the first quarter, the combined number of orders from Alibaba’s international commerce retail businesses dropped by 4% YoY due to changes in the European Union VAT rules, depreciation of the Euro against the US dollar and supply chain disruptions caused by the Russia-Ukraine war.

After witnessing a slowdown through April and May, Alibaba saw signs of recovery across its businesses in June. The company remains confident in its long-term growth opportunities based on its consumer base and its diversified and resilient business model.

Total revenue from Alibaba’s cloud segment increased 10% YoY to $2.64 billion. This growth was driven by recovering growth of non-Internet industries, driven by financial services, public services, and telecommunication industries. This was partly impacted by the loss of a major customer as well as soft demand from other customers in the Internet industry in China.